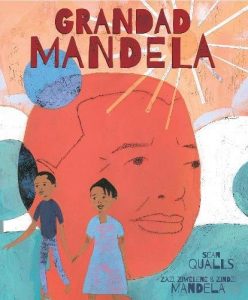 Synopsis
Nelson Mandela’s two great-grandchildren ask their grandmother, Mandela’s youngest daughter, 15 questions about their grandad – the global icon of peace and forgiveness who spent 27 years in prison. They learn that he was a freedom fighter who put down his weapons for the sake of peace, and who then became the President of South Africa and a Nobel Peace Prize-winner, and realise that they can continue his legacy in the world today. Seen through a child’s perspective, and authored jointly by Nelson Mandela’s great-grandchildren and daughter, this amazing story is told as never before to celebrate what would have been Nelson’s Mandela 100th birthday. 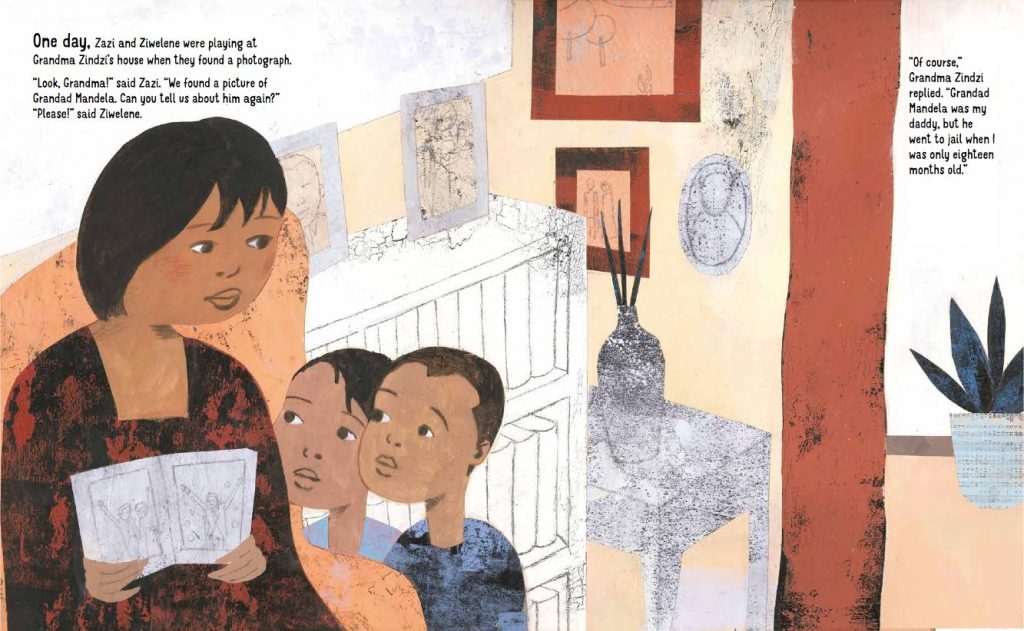 Reflection
Born on July 18, 1918 Nelson Mandela is best known for promoting messages of forgiveness, peace and equality.  He spent 27 long years in prison, but when he was released he became the first Black President of South Africa and eventually won the Nobel Prize for Peace.  In 1994, Mandela successfully brought down the Apartheid government abolishing the original ruling of separating White people from Black people.

Grandad Mandela is a beautiful and important story told from the perspective of Mandela’s two youngest great-grandchildren and daughter.  The story begins with little Zazi and Ziwelene approaching their grandmother (Mandela’s youngest daughter, Zindzi) to tell them about their great-grandfather after finding a photograph of him around the house.  Mandela’s daughter goes on to her grandchildren the story of why Mandela went to jail when she was just eighteen months old.

In true childlike fashion, the kids continue to probe asking a series of 15 different questions about their great-grandfather.  They are curious and want to know more like:

Why did grandad go to jail?
Why did the white people start making everybody’s lives sad?

I love how Mandela’s daughter carefully responds to each question in a way that’s easy for smaller children to understand.

He went to jail because he was fighting against apartheid.  Apartheid was a law in South Africa that separated black people and white people, and said that white people were better.  Grandad was fighting for us all to be equal.

It’s because white people were taught under colonization and apartheid to hate.  They were taught that they were better than black people. 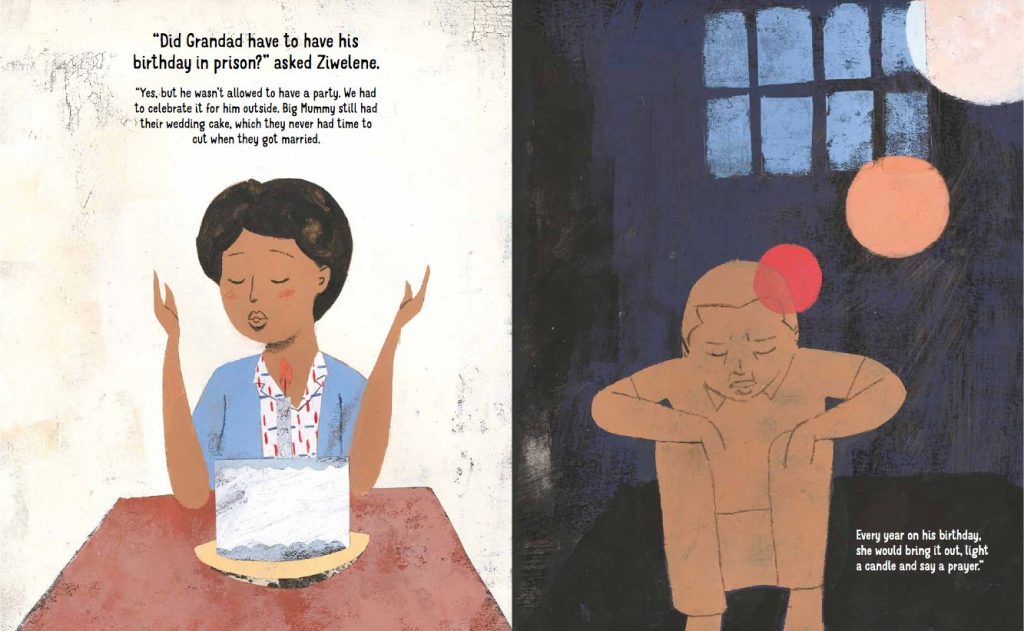 I think each question and answer response is well thought out and easily digestible for little readers.  The illustrations beautifully capture each memory and the time period so well.  You’ll see pictures of Winnie Mandela silently celebrating Mandela’s birthday each year he was in prison.  She kept the wedding cake they never had a chance to cut when they got married.  Every year on Mandela’s birthday, she would bring it out, light a candle, and say a prayer for him.  Be still my heart!

In the end, Mandela is finally released after spending nearly three decades of his life behind bars.  Everyone in South Africa is seen rejoicing, White and Black people.  What an amazing day that must have been for the people in South Africa who spent so many years living under apartheid!

I remember seeing some of the television coverage on that glorious day back on February 11, 1990.  It seemed like the whole world was rejoicing and celebrating.  It was as if Nelson Mandela’s release set us all free in a way.  His release helped set people free from anything they may have been  struggling with at the time.  His release gave me a renewed sense of hope and optimism.  From that day on, I held Nelson Mandela in such high regard often looking to his words for guidance in coming to grips with the ways—the sometimes brutal ways—in which the world works.

To say that I am grateful for Nelson Mandela’s example doesn’t suffice.  That’s why I’m so glad this picture book exists so I can keep his legacy alive by reading it with my children and for new generations to come.  His legacy lives on and we can all learn valuable lessons from him and his humanity.  Grandad Mandela is sure to inspire readers to achieve anything they want in life.  It inspires me to keep showing up daily, to keep writing, to keep fighting, to keep forgiving, and to keep loving.

Your turn: Are you planning to celebrate Nelson Mandela’s upcoming centenary (100th birthday)?  If so, how will you be celebrating?  Feel free to share in the comments.

One thought on “Grandad Mandela (A Book Review)”

Sisters and Champions: The True Story of Venus and Serena Williams (A Book Review)