This year, Lunar New Year – The Year of the Monkey – begins on Monday, February 8th and lasts until Jan 27th, 2017.  For nearly 5,000 years, the Chinese culture has divided time in cycles of twelve years.  An animal represents each year.  Therefore, if you are born in a particular year, then you share the personality of that animal.  This year it’s the Year of the Monkey, the ninth animal in the cycle. The next Year of the Monkey will be in 2028.

The Year of the Monkey: Tales from the Chinese Zodiac by Oliver Chin, illustrated by Kenji Ono 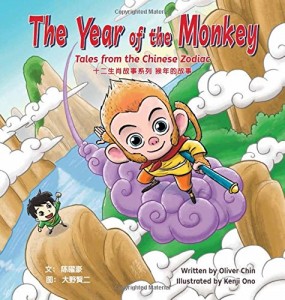 Synopsis
Max is the son of the legendary Monkey King and Queen. Succeeding at school is not easy, but luckily playing in the gym is! Can Max forge his own claim to fame?  Empowering themes of self-discovery and cultural exchange, plus charismatic characters, have proven appeal with children, parents, and elementary educators.

Reflection
This book is part of a twelve book series that has a different book for each animal in the Chinese zodiac.  All of the books in the series are written in both English and simplified Chinese, which is a bonus if you can read/speak both languages.

I read this book with the kids a few weeks ago.  The kids seemed to really get a kick out of little Max!  He’s so curious and full of energy!  Their favorite part of the story was the jianzi tournament because it was so action packed.  We had fun trying to re-enact the scenes.  Jianzi looks like a game that sort of resembles what Americans call hacky sack.

Max is determined to be the best jianzi player, but his mom (the Monkey Queen) tells him to stop wasting his time “playing silly games.”  His parents want him to accomplish extraordinary things like they did.  After hearing all of the amazing stories from his parents’ past, Max starts to second guess himself about his love of jianzi and entering the tournament.  However, in the end his parents have a change of heart and push him and his friend to be the best and conquer the undefeated Dragon and the Tiger team.

I liked all of the colorful illustrations and the overall messages of teamwork, practice, courage, and determination.  I think this book is a fun way to introduce children to the lunar new year.  Be sure to point out the other animals in the Chinese zodiac that are shown throughout the book.  We had fun searching for them on the different pages!  I haven’t read any of the other 11 books in the series, but I’m sure they’re all equally as entertaining.

Also, there is a scannable QR code provided if you are interested in downloading an interactive app for the book.  The app offers word-by-word highlighting, instant playback, and gives kids the ability to read at their own pace.

Purchase The Year of the Monkey at:
Amazon | Book Depository | Immedium

Your turn: Do you plan to celebrate the Lunar New Year with your family or students?  Feel free to share in the comments.

5 Women Authors to Watch Plus a Giveaway!

29 Black Picture Books for Black History Month, Or Any Month