Disclaimer: I received a complimentary copy of this book from Simon Kids in exchange for an honest review.  As always, all opinions expressed are my own.

I’m in full 2020 review mode pouring over all of the beautiful books I’ve received from publishers and authors so far. Freedom Bird is an absolute gem that left me in happy tears with a full heart.

In the beginning, readers are introduced to an enslaved family of four: Samuel, Maggie, Millicent and John Wheeler who live on Simon Plenty’s plantation. Very early on, John and Millicent’s parents are sold away leaving them behind.  Although the children were left alone on the plantation, their parents had already sown the seeds of freedom in their children’s minds and hearts. They told them stories of how people could fly away to freedom as free as a bird and they believed it.

One day while working out in the field, a huge bird is flying overhead all of the enslaved people. Annoyed of the bird, the white overseer grabs his leather whip and yanks the bird right out of the sky injuring it.  Late in the evening, Millicent and John sneak out in the field and bring the injured into a shed to begin bringing it back to health. They are able to keep the bird hidden for four months until it was discovered.

Upon discovery from the overseer, Millicent tells the bird to fly away and it does. In a daring escape to freedom Millicent and John follow the bird which leads them West.  In the author’s note you find out this book is a combination of three stories from history meant to all sit alongside each other: Big Jabe, Freedom Bird, and Thunder Rose. Millicent in this book is Millicent MacGruder, mother of Thunder Rose who escaped to freedom and went West.

The thing I love most about this story is it filled me with so much comfort and peace knowing enslaved people desired and longed for freedom.  Some history books describe enslaved people as being “happy” which just isn’t true.  The fact that Samuel and Maggie sowed the seeds of freedom in their children’s minds and hearts fills me with so much joy.  I cannot begin to fathom what it must have been like to be enslaved living on a plantation especially as a child without your parents.  Humans are truly resilient beings.

Freedom Bird is a beautifully written, compelling, (sometimes heartbreaking) yet inspiring story about enslaved Americans of African descent and their desire to be as free as a bird.  Due to a few pages of lengthy text, I’d recommend this one for slightly older readers ages 8 – 9 and up.  Although it can be read aloud with people of all ages.  A great book to add to your home, school or public library for reading during Black History Month or anytime of the year.  Publishes January 14, 2020 from Simon Kids. Ages 5-9 and up. 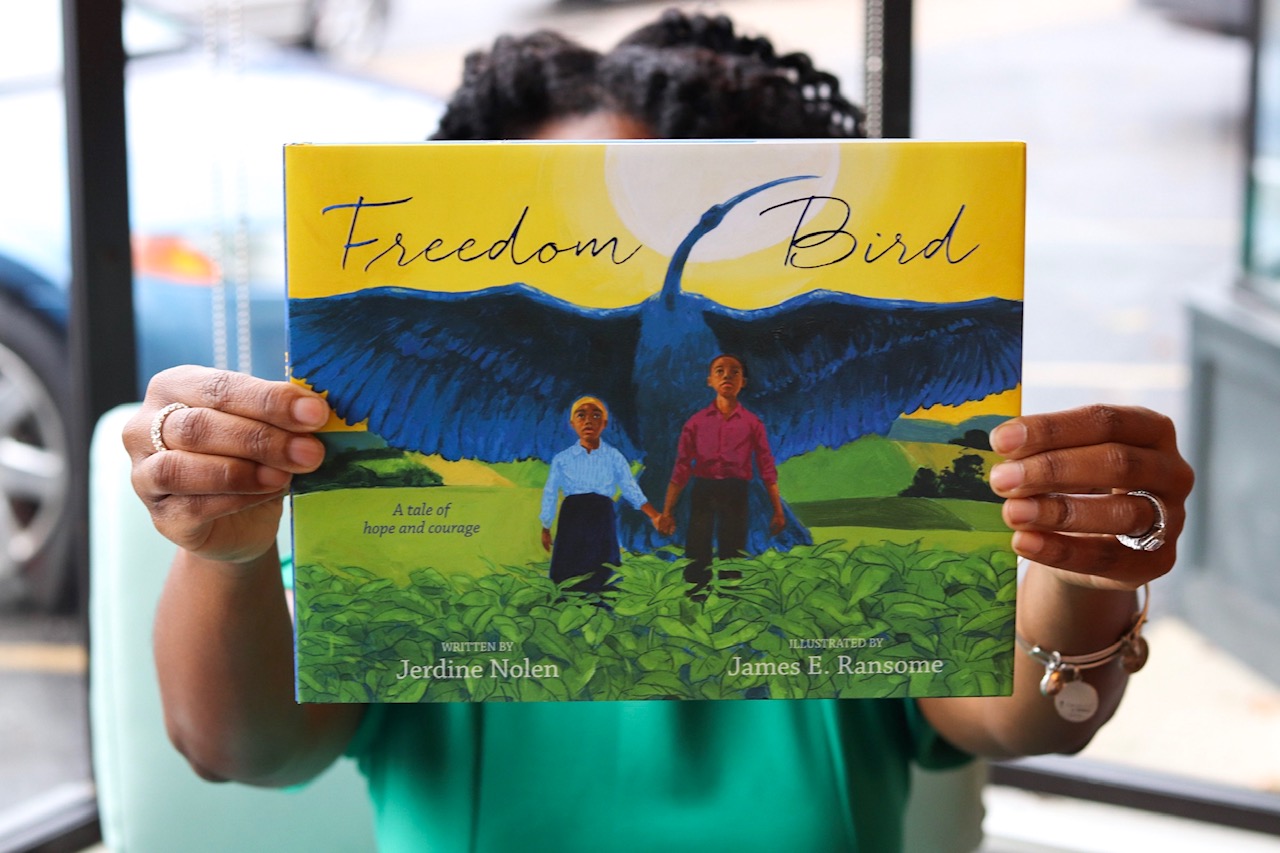 Your turn: Have you ever read the other two books mentioned in this post (Big Jabe and Thunder Rose) also written by Jerdine Nolen?  Feel free to share in the comments.

A Kids Book About: Tackling Tough and Empowering Topics With Children

The Men of Bookstagram: Up Close and Personal with James Trevino (@James_Trevino)