It’s almost back to school season!  I love the excitement a new school year brings for our entire family.  I always look forward to starting anew with a clean slate and getting back into our school year routines.

Soon many parents and educators will be scouting libraries, websites and bookstores for the perfect “going to school” books.  I think the most popular topics for these books fall into a few different categories:

This year my “Back to School” list includes picture books for preschoolers, elementary students and a few recommendations for middle grade readers.  I hope you’ll find these helpful and possibly a few to read with your children, grandchildren or students.  Enjoy! (Note: This post contains affiliate links.)

All Are Welcome by Alexandra Penfold and Suzanne Kaufman 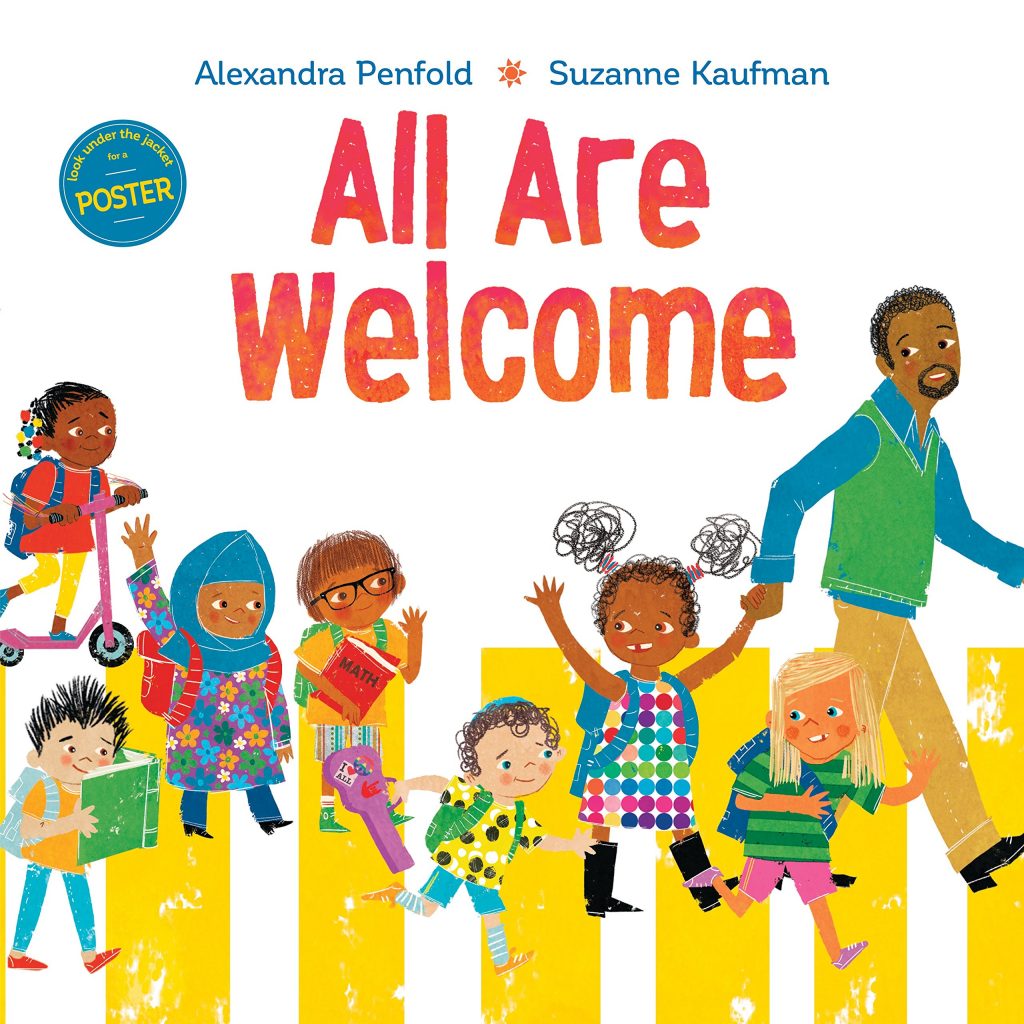 Follow a group of children through a day in their school, where everyone is welcomed with open arms. A school where kids in patkas, hijabs, and yarmulkes play side-by-side with friends in baseball caps.  All Are Welcome lets young children know that no matter what, they have a place, they have a space, they are welcome in their school. 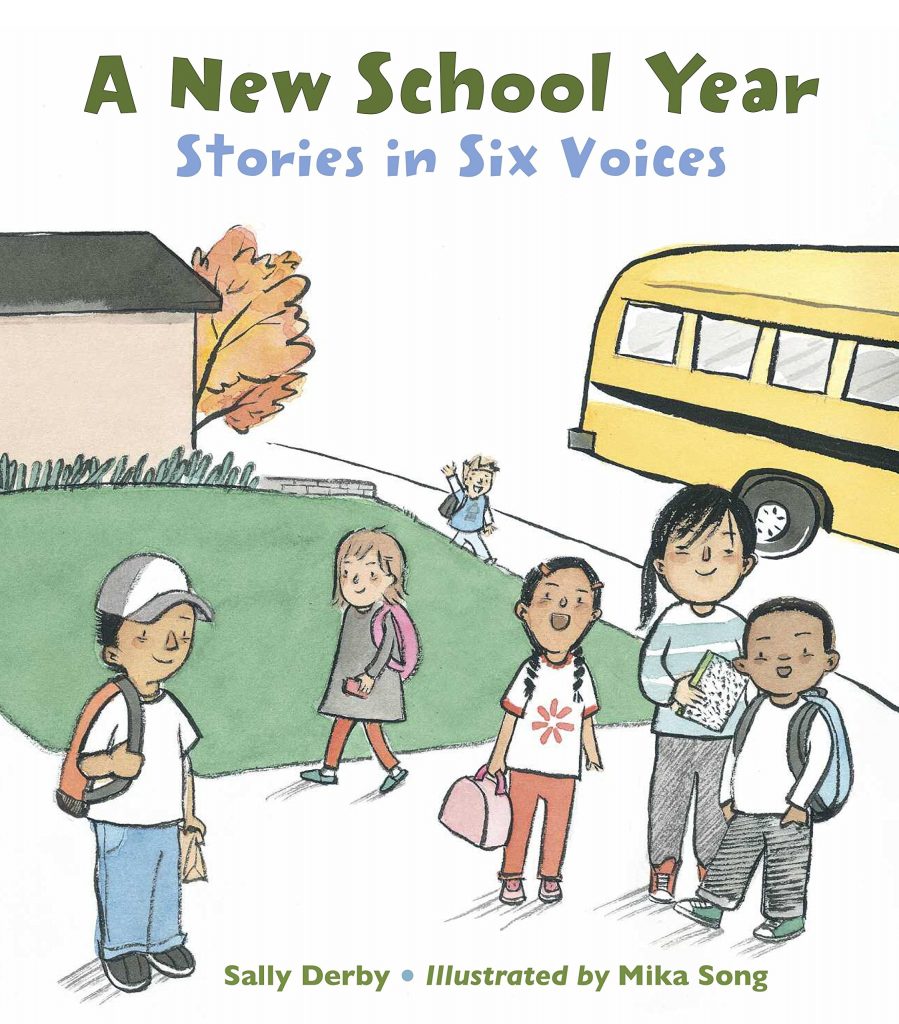 In a unique narrative, readers meet a diverse group of six children ranging in age from Kindergarten through ﬁfth grade. With nerves and excitement each child gears up for a new school year by hustling in the morning, meeting new teachers and new classmates during the day, and heading home with homework and relief by day’s end.

Back to School: A Global Journey by Maya Ajmera and John D. Ivanko 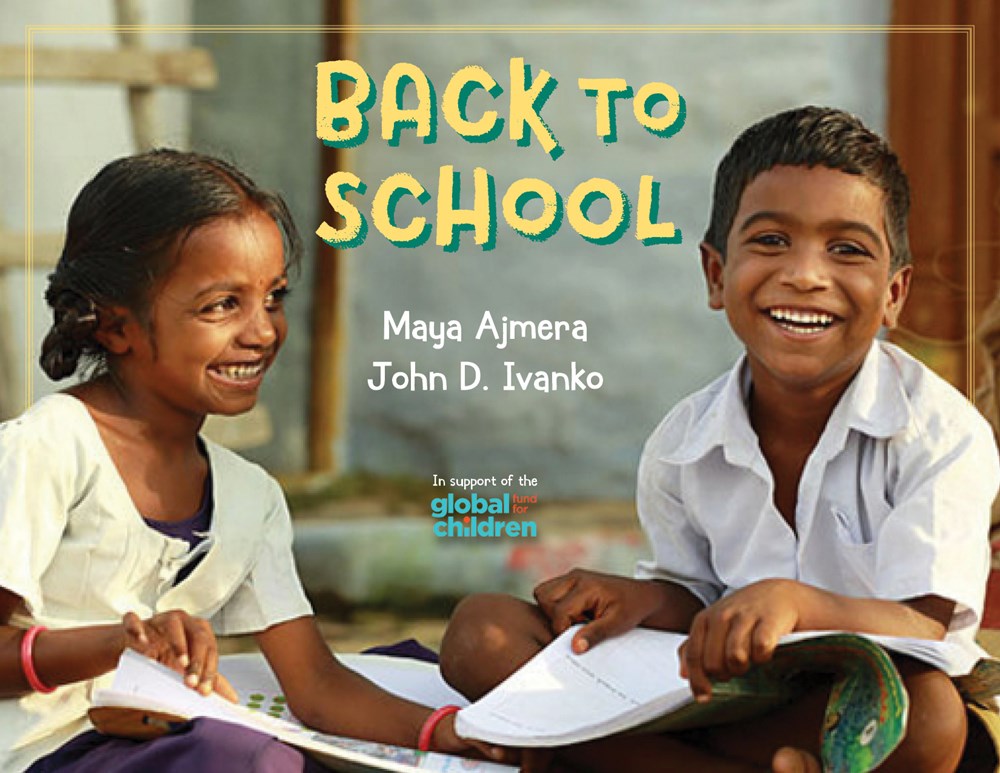 BACK TO SCHOOL invites young minds to sit in the front row and share the exciting experience of learning with kids just like themselves all over the world. Whether they take a school bus, a boat, or a rickshaw to get there, kids around the globe are going to school and growing smarter and more curious every day. 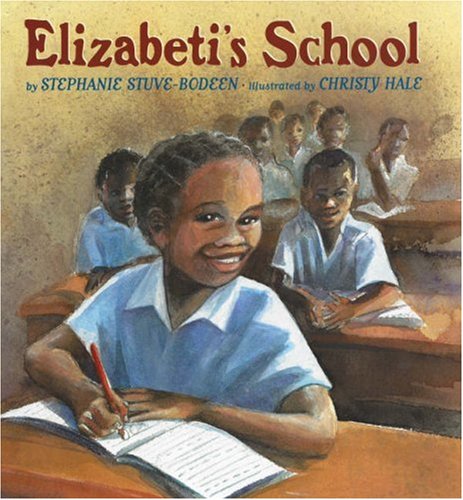 In this contemporary Tanzanian story, author Stephanie Stuve-Bodeen and artist Christy Hale once again bring the sweet innocence of Elizabeti to life. Readers are sure to recognize this young child’s emotions as she copes with her first day of school and discovers the wonder and joy of learning. 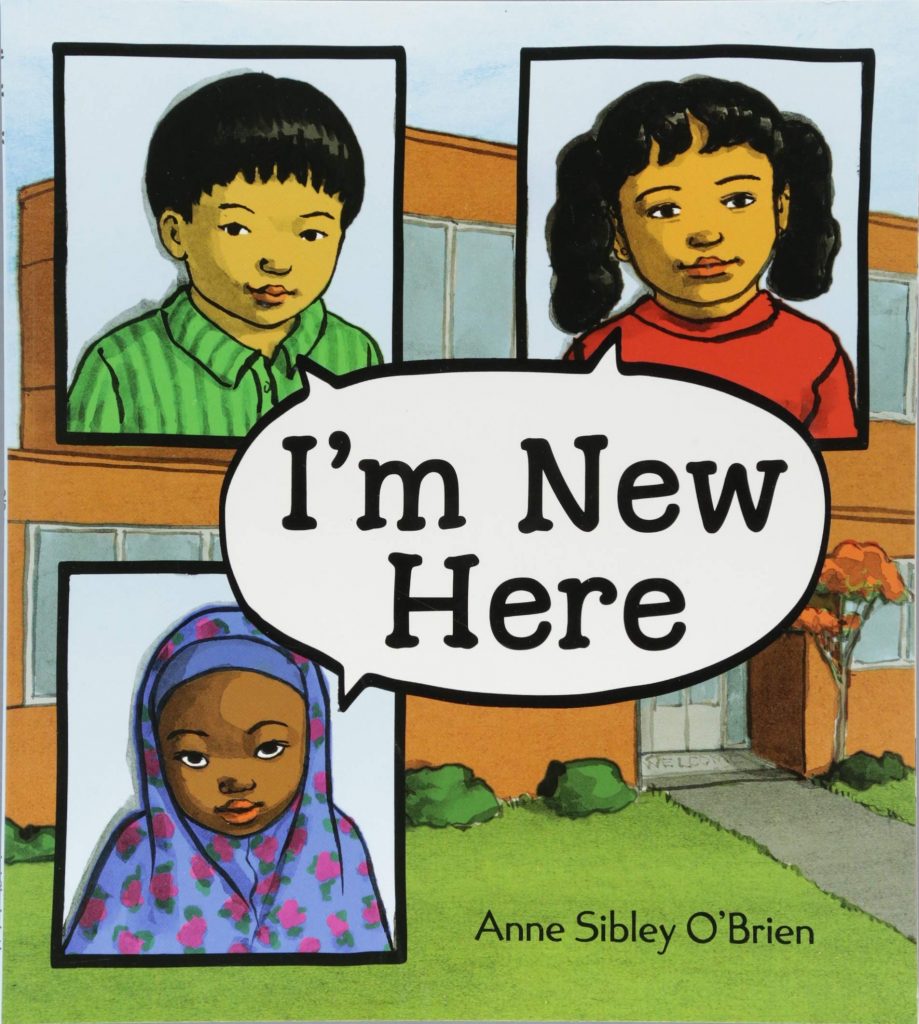 Three students are immigrants from Guatemala, Korea, and Somalia and have trouble speaking, writing, and sharing ideas in English in their new American elementary school. Through self-determination and with encouragement from their peers and teachers, the students learn to feel confident and comfortable in their new school without losing a sense of their home country, language, and identity. 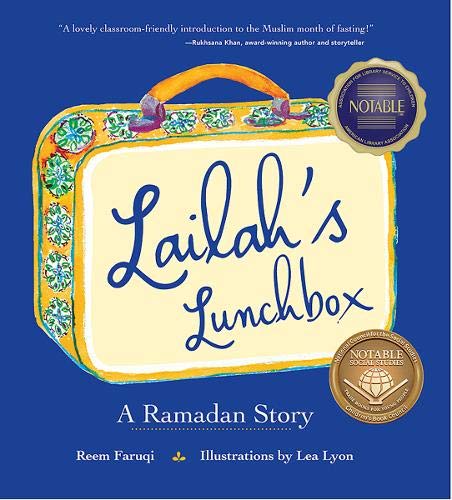 Lailah is in a new school in a new country, thousands of miles from her old home, and missing her old friends. When Ramadan begins, she is excited that she is finally old enough to participate in the fasting but worried that her classmates won’t understand why she doesn’t join them in the lunchroom.

Lola Goes to School by Anna McQuinn and Rosalind Beardshaw 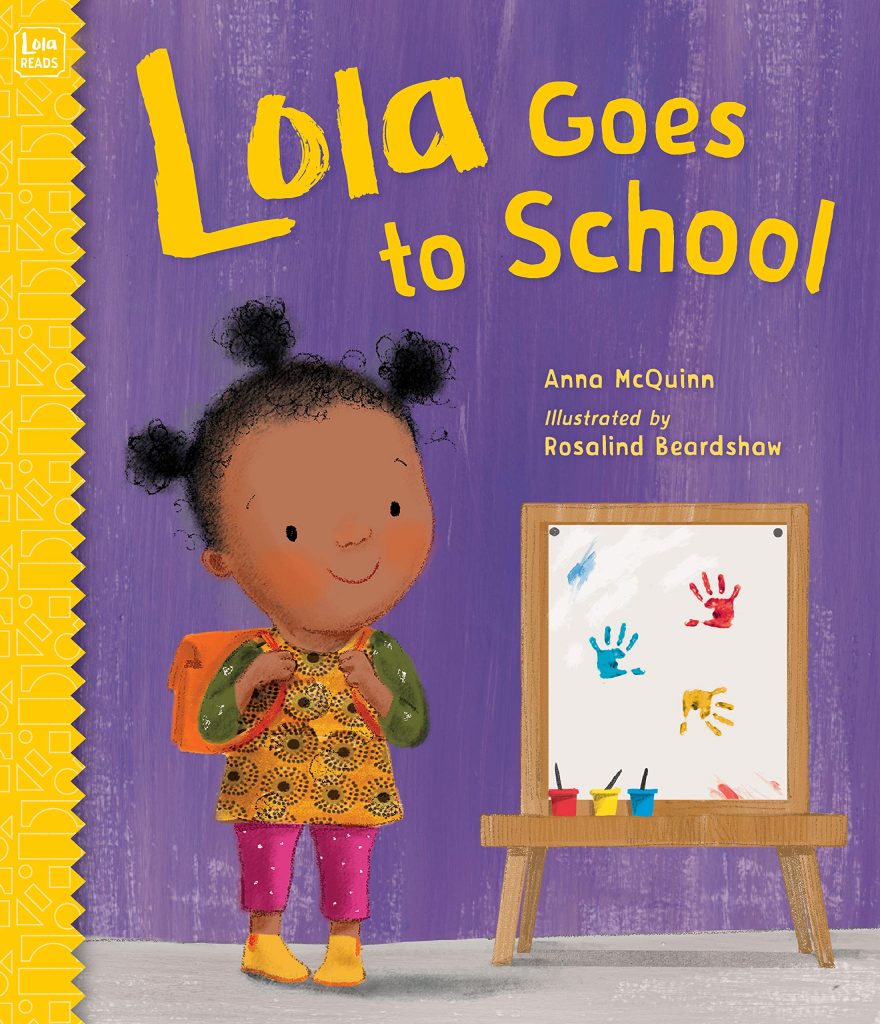 Lola and her family prepare for the first day of school the night before, then get up early, take pictures, and head to class. Lola puts her things in her cubby, chooses her activities, reads, plays, and has a snack. Before she knows it, it’s time to sing the good-bye song and rush into Mommy’s arms for a warm reunion. A comforting, cheerful read that demystifies the school day for preschoolers and kindergarteners.

Ming Goes to School by Deirdre Sullivan and Maja Löfdahl 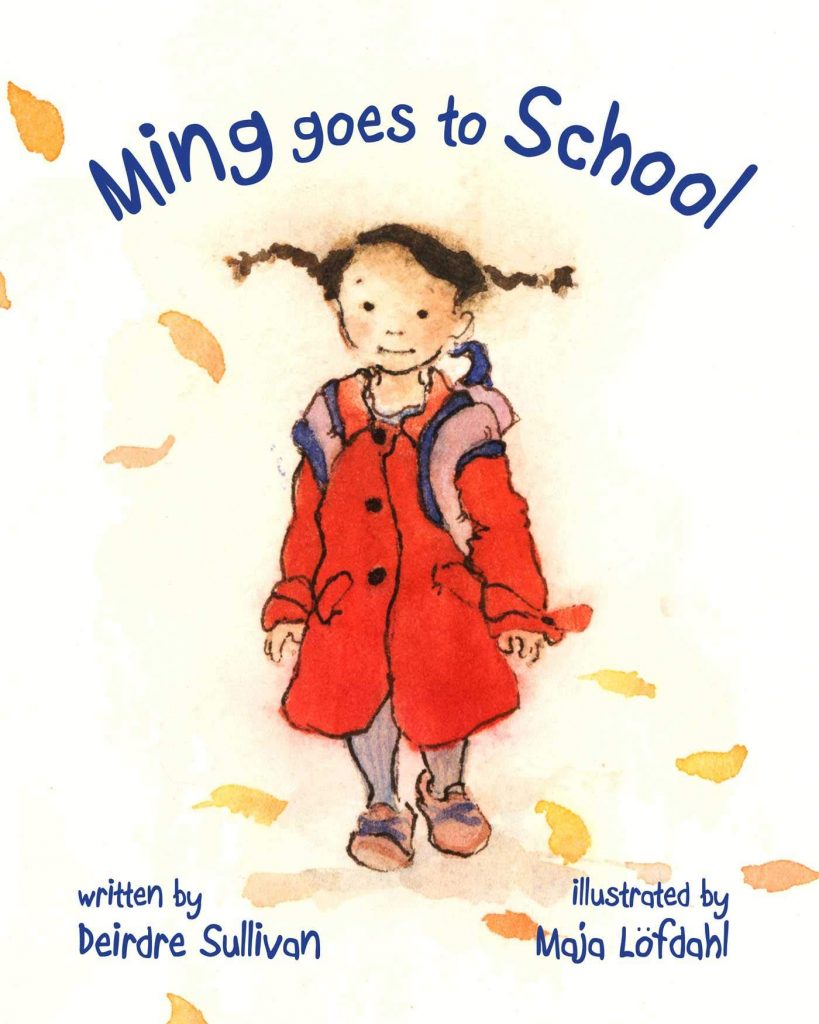 This is a very sweet story with soft, evocative watercolor illustrations that will help kids to grow comfortable with the idea of starting preschool. Ming is curious and playful and ready for adventure, but even she gets scared of new things sometimes. Kids will relate to her desires and fears and will be excited to see Ming at the top of the slide by the story’s end. 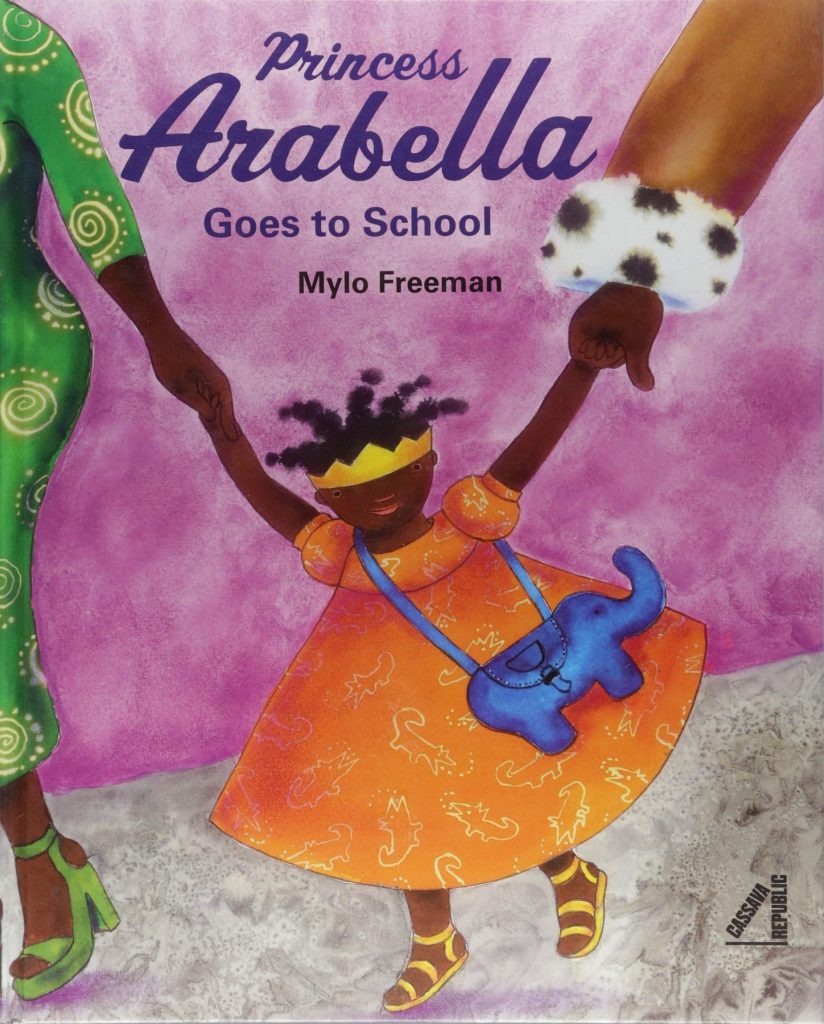 A delightful addition to the popular ‘Princess Arabella’ series. Princess Arabella and her friends embark upon their first day at Princess School. They find themselves taking some very unusual lessons – and when they are allowed to bring their pets to school, fun and games ensue! 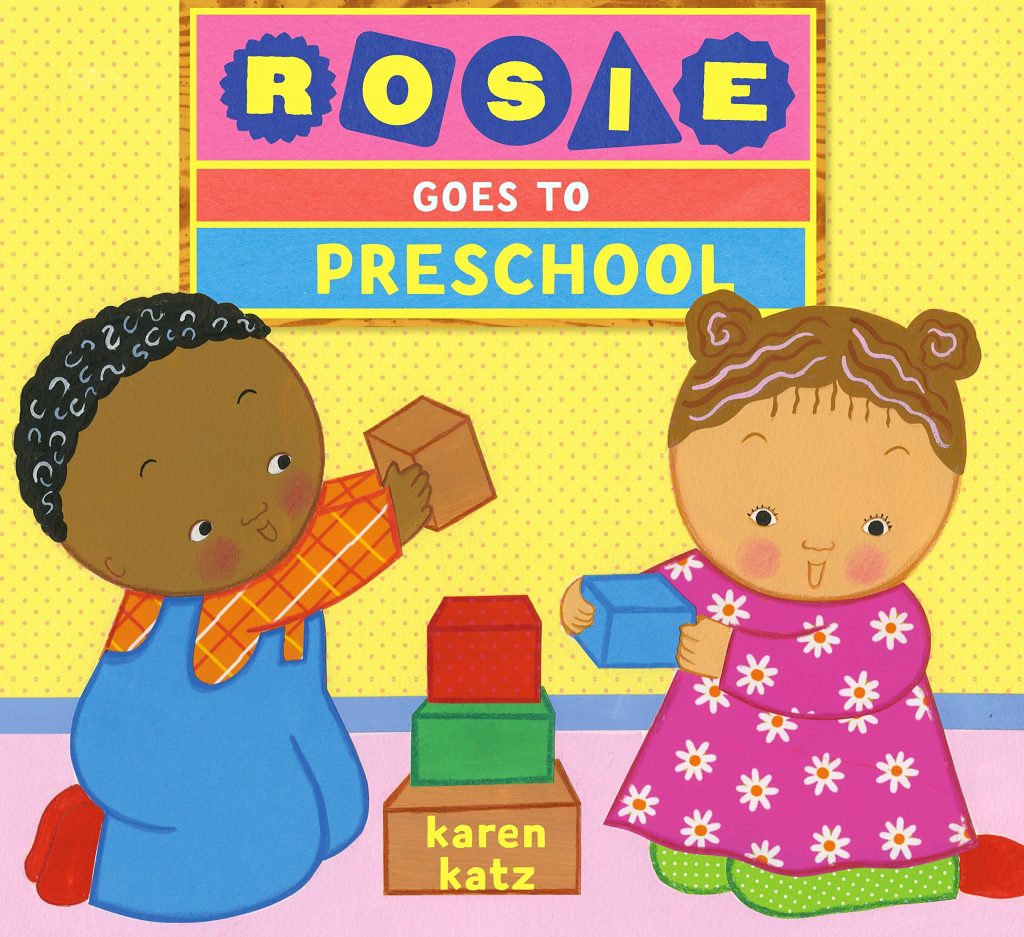 A very cute and diverse set of children are seen putting their belongings in their cubbies, playing together, eating lunch and using the potty. They also participate in circle time, story time, sing songs and clean up before laying down for nap time. The sequence of events shown in this book is very similar to the schedule the kids follow at school so it’s very familiar to them. A wonderful back-to-school book for preschoolers to help them get acclimated to routines and adjust to school. 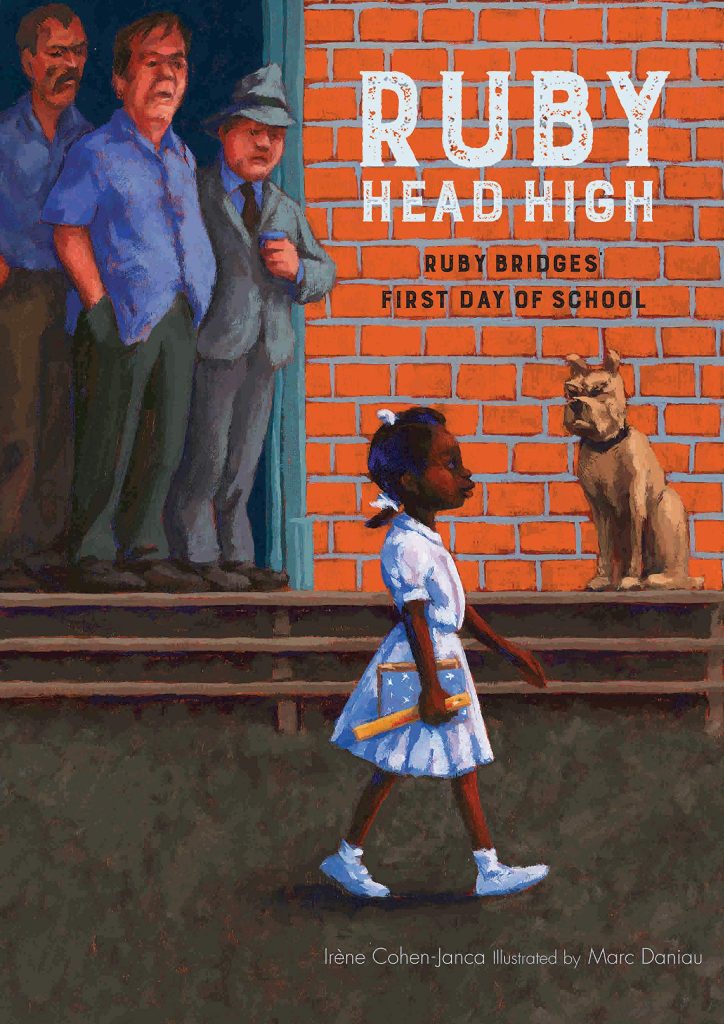 Inspired by an iconic Norman Rockwell painting and translated from an original French text, this is a story about the day a little girl held her head high and changed the world.

Rulers of the Playground by by Joseph Kuefler 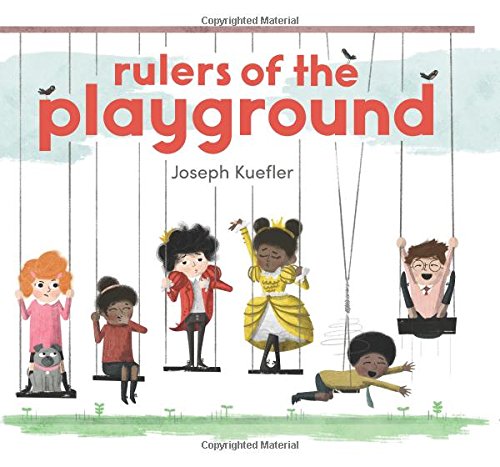 Both Jonah and Lennox want to be the rulers of the playground, but who will reign as the king or queen of the “kingdom”? 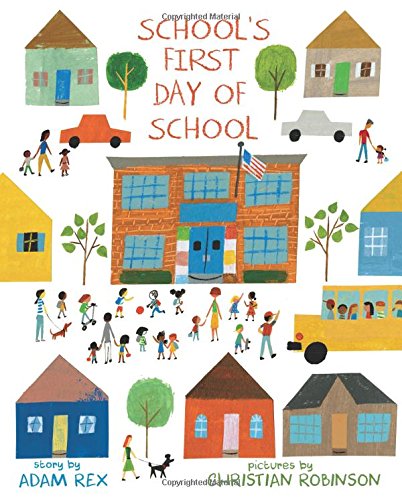 It’s the first day of school at Frederick Douglass Elementary and everyone’s just a little bit nervous, especially the school itself. What will the children do once they come? Will they like the school? Will they be nice to him?

The school has a rough start, but as the day goes on, he soon recovers when he sees that he’s not the only one going through first-day jitters.

Sumi’s First Day of School Ever by Joung Un Kim 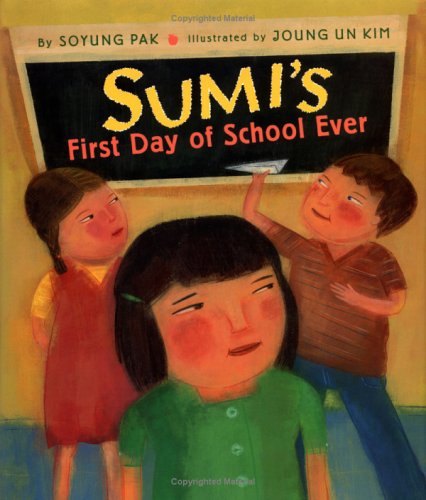 The first day of school can be lonely and scary, especially when you don’t speak the same language as everyone else. Sumi only knows one phrase in English, “Hello, my name is Sumi.” This doesn’t seem nearly enough to prepare her for a big school with wide stairs, noisy children, and a mean classmate.

The Buddy Bench by Patty Brozo and Mike Deas 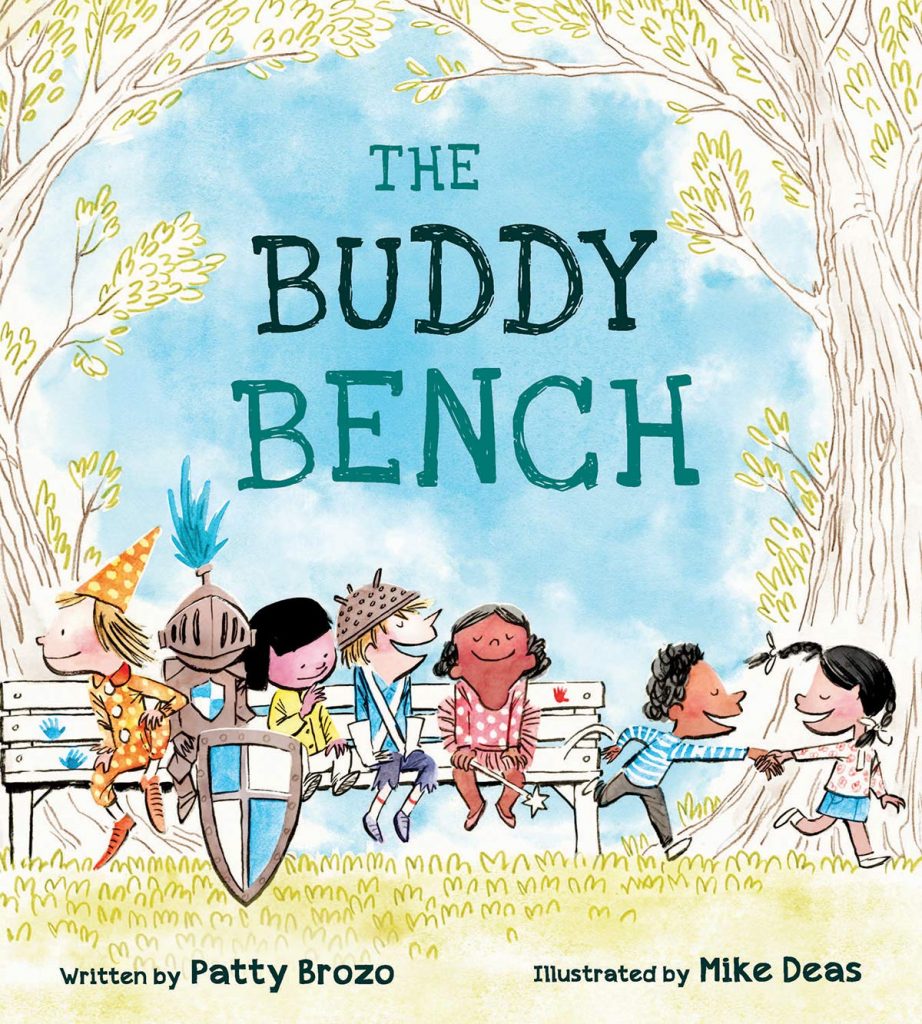 Having seen what being left out is like, children become agents of change, convincing their teacher to let them build a buddy bench.

The Day You Begin by Jacqueline Woodson and Rafael López 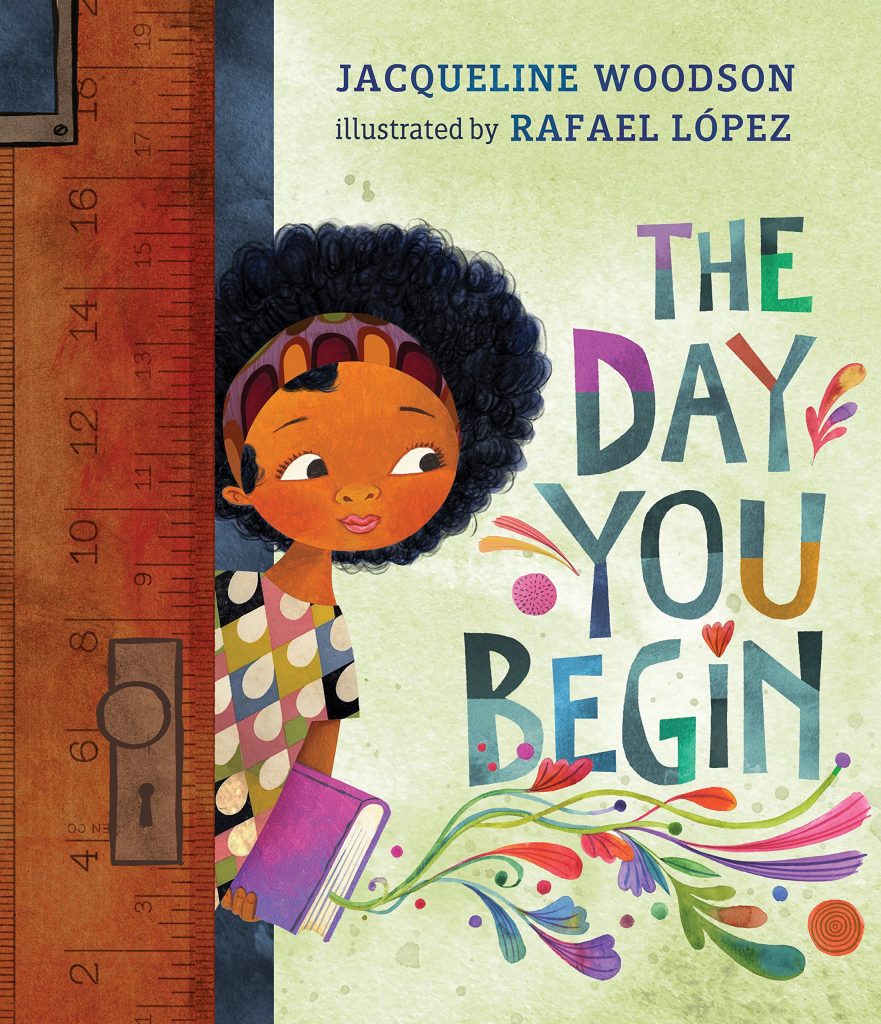 There are many reasons to feel different. Maybe it’s how you look or talk, or where you’re from; maybe it’s what you eat, or something just as random. It’s not easy to take those first steps into a place where nobody really knows you yet, but somehow you do it.

The King of Kindergarten by Derrick Barnes and Vanessa Brantley-Newton 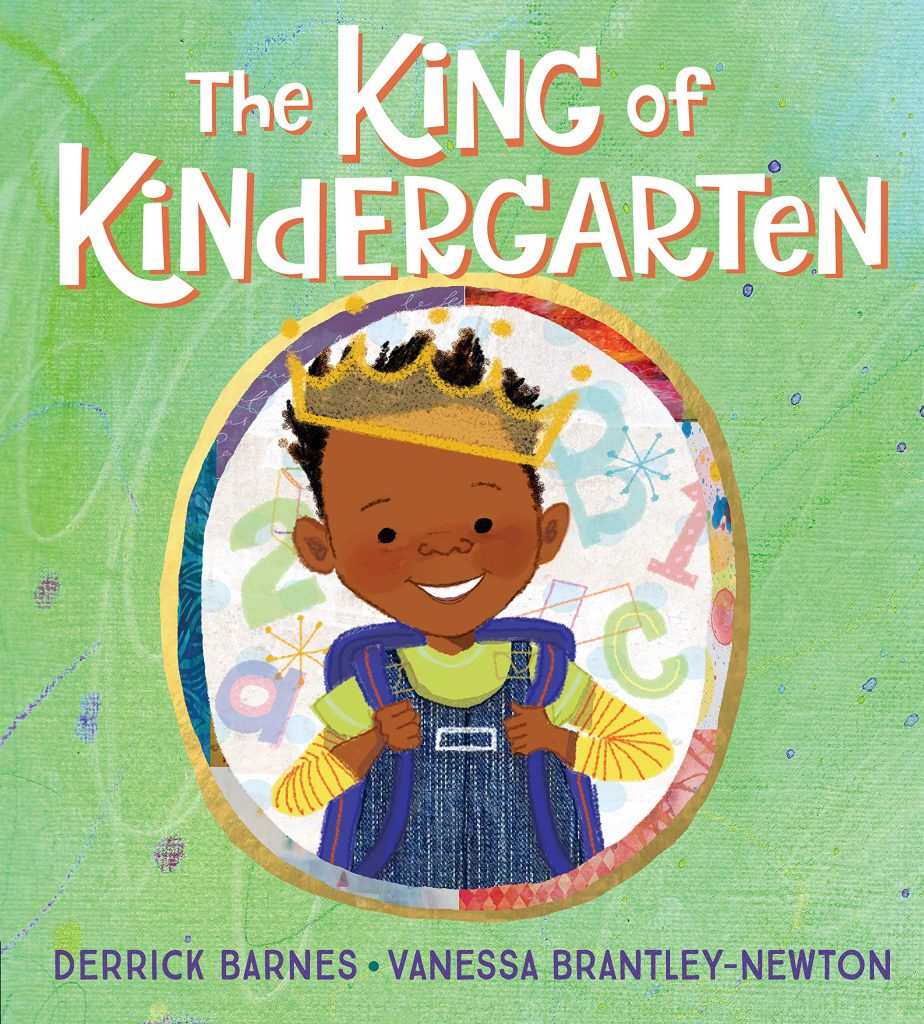 Starting kindergarten is a big milestone–and the hero of this story is ready to make his mark! He’s dressed himself, eaten a pile of pancakes, and can’t wait to be part of a whole new kingdom of kids. The day will be jam-packed, but he’s up to the challenge, taking new experiences in stride with his infectious enthusiasm! And afterward, he can’t wait to tell his proud parents all about his achievements–and then wake up to start another day.

The Name Jar by Yangsook Choi 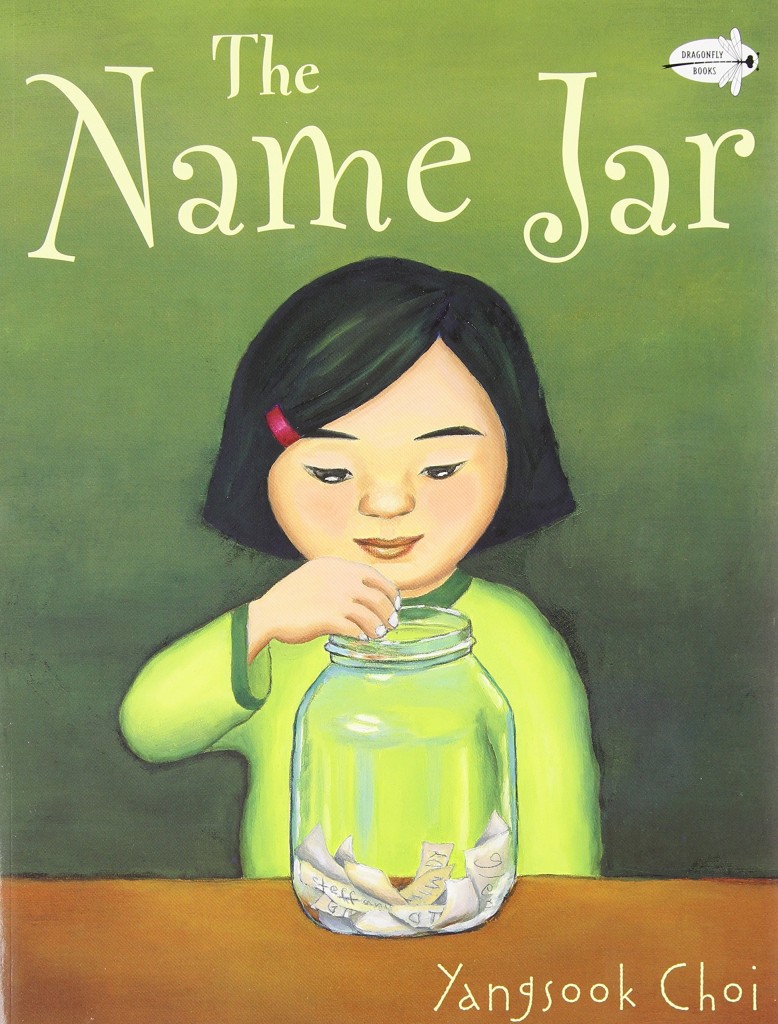 Being the new kid in school is hard enough, but what about when nobody can pronounce your name? Having just moved from Korea, Unhei is anxious that American kids will like her. So instead of introducing herself on the first day of school, she tells the class that she will choose a name by the following week. Her new classmates are fascinated by this no-name girl and decide to help out by filling a glass jar with names for her to pick from. But while Unhei practices being a Suzy, Laura, or Amanda, one of her classmates comes to her neighborhood and discovers her real name and its special meaning.

The Sandwich Swap by Queen Rania of Jordan Al Abdullah 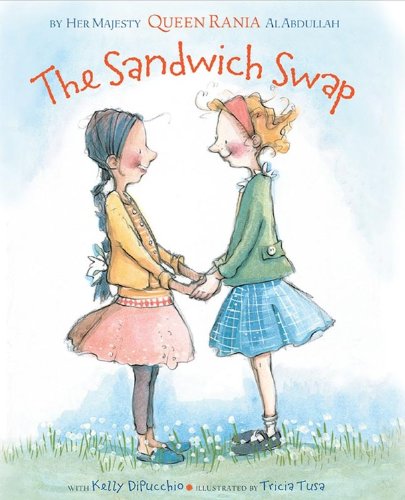 The smallest things can pull us apart-until we learn that friendship is far more powerful than difference. In a glorious three-page gatefold at the end of the book, Salma, Lily, and all their classmates come together in the true spirit of tolerance and acceptance.

The School Book by Todd Parr 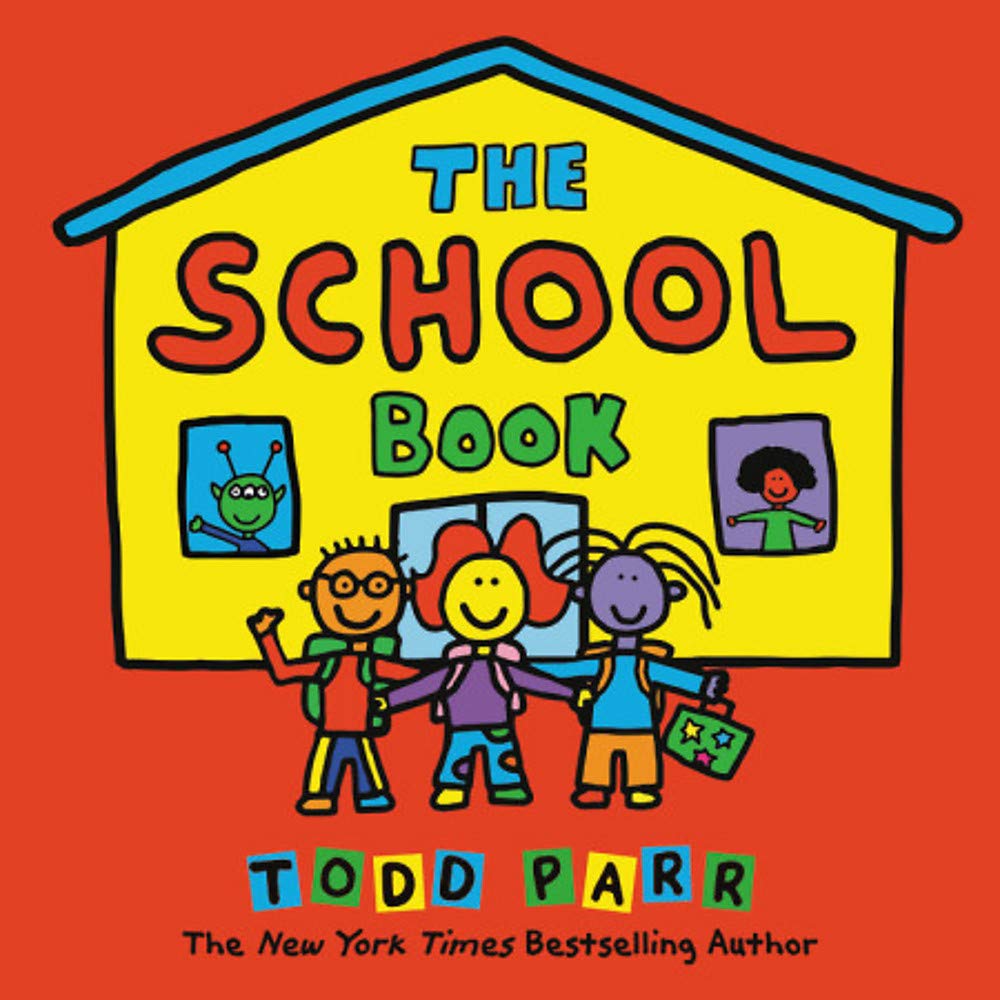 With his trademark bright colors and bold lines, Todd Parr introduces readers to a perennial source of childhood anxiety and excitement both: school! From morning routines to meeting new people to learning and playing together, Todd explores all the different things that can happen in school, all the while sharing a cheerful, child-friendly message of sharing, inclusion, and community. 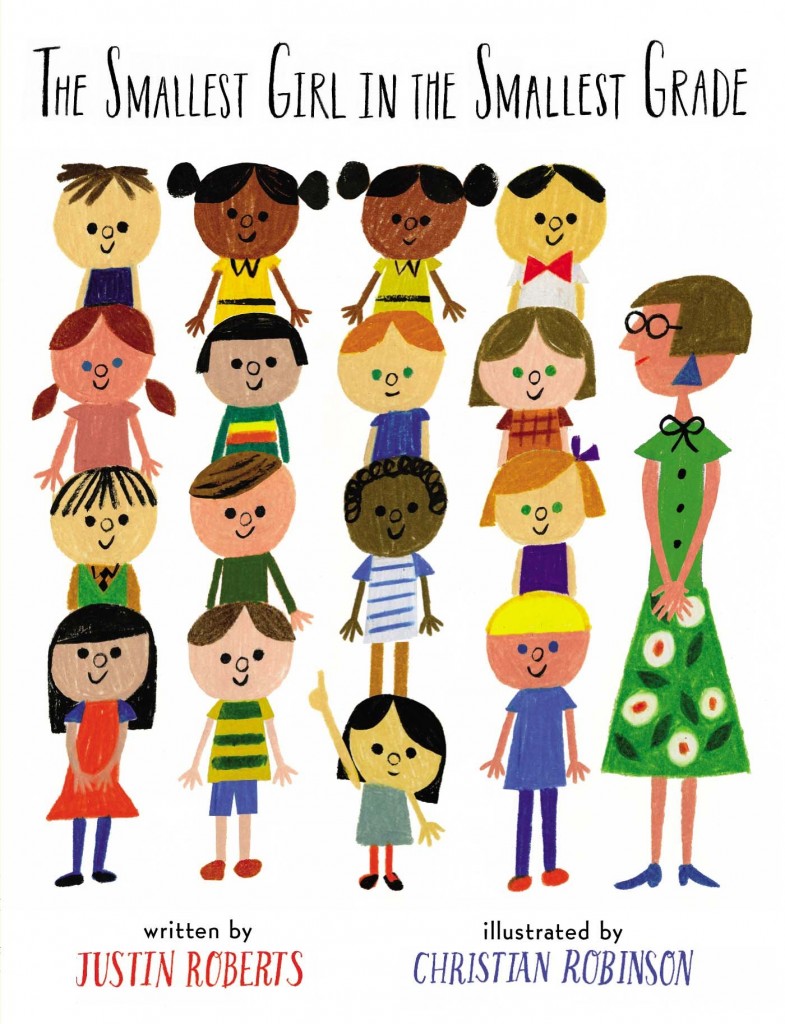 Sally notices everything—from the twenty-seven keys on the janitor’s ring to the bullying happening on the playground. One day, Sally has had enough and decides to make herself heard. And when she takes a chance and stands up to the bullies, she finds that one small girl can make a big difference. 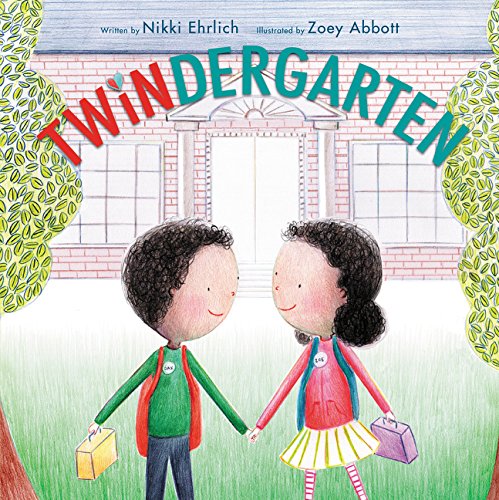 It’s the night before the twins are starting kindergarten, and they have the just-about-to-start-school jitters. After all, they will be in different classrooms! What will kindergarten be like when they’re not together all day? But Dax and Zoe will learn that kindergarten is full of new surprises and adventures, and being apart for a short while isn’t so bad.

President of the Whole Sixth Grade by Sherri Winston 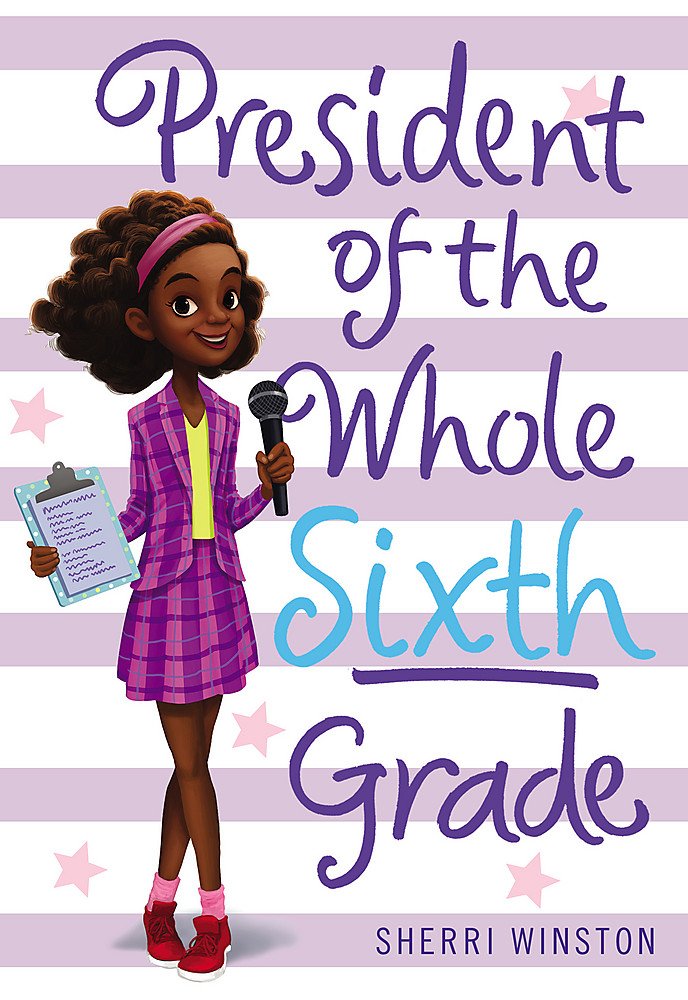 Brianna Justice is determined to raise enough money for the big class trip to Washington, D.C., but she’s up against a lot: classmates who all pretend to be something they’re not, a new nemesis determined to run her out of office, and the sinking feeling she’s about to lose her two best friends for good. But just when she begins to lose hope, she comes to realize that sometimes surprises can turn out even better than the best-laid plans.

Save Me a Seat by Sarah Weeks and Gita Varadarajan 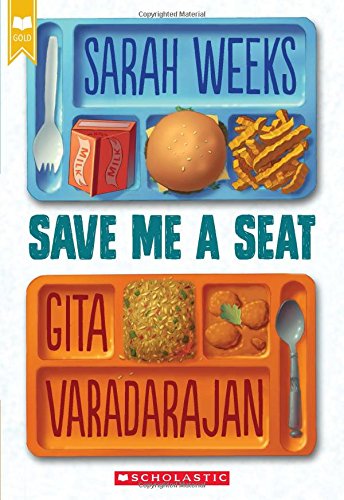 Joe and Ravi don’t think they have anything in common — but soon enough they have a common enemy (the biggest bully in their class) and a common mission: to take control of their lives over the course of a single crazy week.

The Boy at the Back of the Class by Onjali Q. Raúf 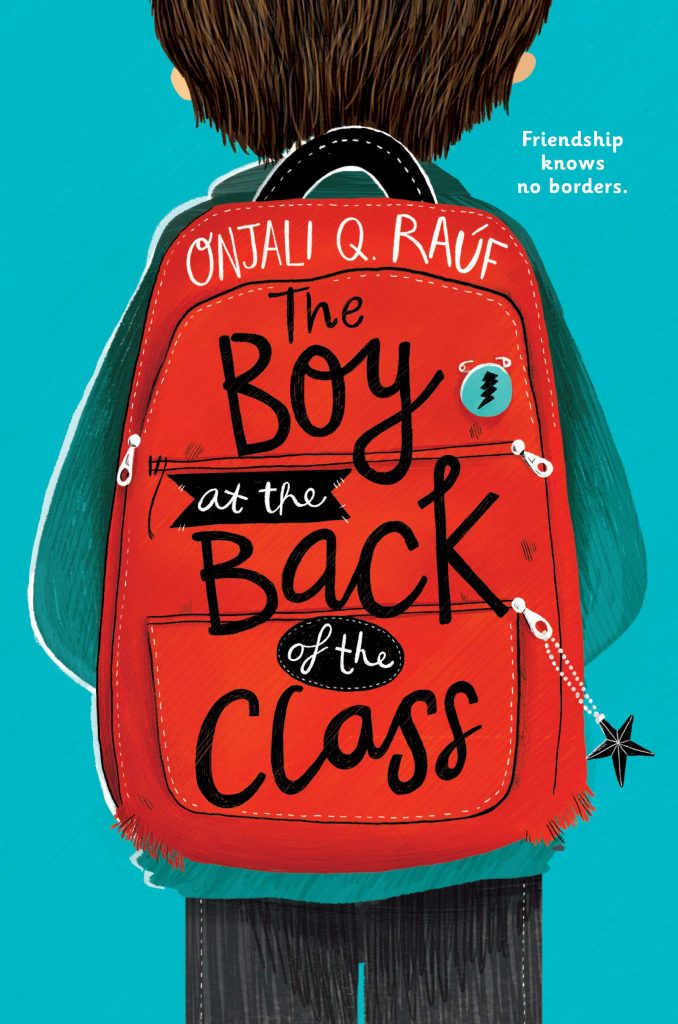 The whole class is curious about this new boy–he doesn’t seem to smile, and he doesn’t talk much. But after learning that Ahmet fled a Very Real War and was separated from his family along the way, a determined group of his classmates bands together to concoct the Greatest Idea in the World–a magnificent plan to reunite Ahmet with his loved ones.

Balancing humor and heart, this relatable story about the refugee crisis from the perspective of kids highlights the community-changing potential of standing as an ally and reminds readers that everyone deserves a place to call home.

Your turn: What books would you add to this list?  Feel free to share some of your favorite school-themed books in the comments.