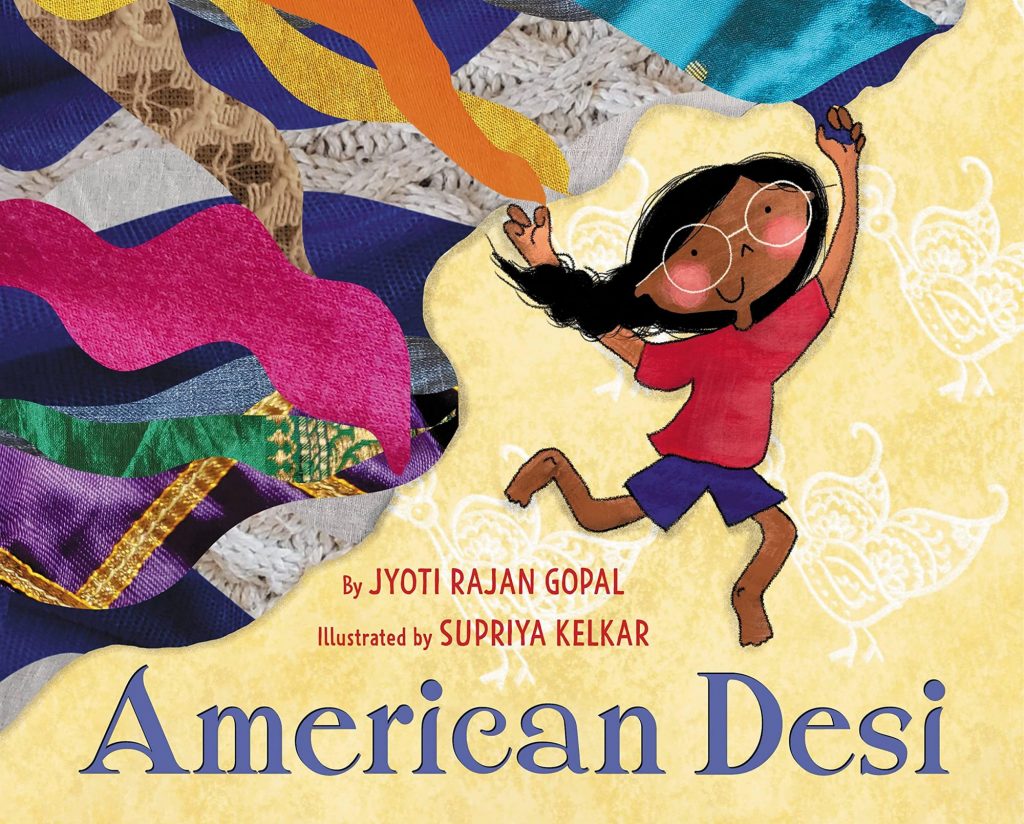 Synopsis
A young girl longs to know where she fits in: Is she American? Or is she Indian? Does she have to pick or can she be both? With bright, joyful rhyme, and paired with an immersive art style using American and Indian fabrics, American Desi celebrates the experiences of young children growing up first and second generation Indian American: straddling the two cultural worlds they belong to, embracing all they love of both worlds and refusing to be limited by either.

This story is a powerful tribute to the joy of being South Asian and for every reader who aspires to bridge their worlds with grace, grit, and confidence.

Inspired by the author’s personal experiences navigating two different cultures, American Desi is a beautiful, affirming, and lyrical story that celebrates being bicultural. A young girl who is straddling two different cultural worlds desires to know where she fits in: Is she American? Or is she Indian? Can she be a combination of both?

“One food here,
one foot there
Straddling, bridging worlds apart.

Searching deep within my heart
The different colors of me.”

Oftentimes, bicultural children struggle with finding their identity and have a strong desire to “fit in”.  It can be hard reconciling conflicting values and cultures as a child.

Due to a lack of affirming picture books like American Desi during my childhood, there were times I often struggled with embracing my family’s Caribbean culture, food, and traditions. It wasn’t until I was much older that I realized there are so many advantages to being from two cultures.  The little girl in this story learns to embrace her Indian and American cultures much sooner than I did, which is great! She learns she can have the best of both worlds.

She can wear henna, bindis, and bangles or shorts, dresses, and pants. She can watch a game of cricket or football and understand the rules of how each game is played.  She can speak Hindi or English and find her true voice and sounds. She can eat mac ‘n’ cheese with a fork or eat dosas and idlis with her hands.  There are no rules and she learns she doesn’t have to choose.

Instead of feeling like she didn’t fit in anywhere, she understand that she fits in everywhere! She fits in with her Indian and American community while staying true to all she knows.

Supriya Kelkar’s illustrious collage-style illustrations enhance this heartwarming story and help make it even more special.  Kelkar use of mixed media, rich colors and texture makes this book a delight to read with the turn of each page.

Overall, American Desi is a beautiful story about a girl juxtaposed between two wonderful cultures in search of finding her true self. Recommended for ages 4 – 8 and up.

Go Beyond the Book: Listen to my podcast interview with Jyoti and Supriya here.

Jyoti Rajan Gopal is a kindergarten teacher, writer, and mom who loves taking any opportunity to break out her Bollywood moves and hip-hop grooves. She grew up in Thailand, Indonesia, Myanmar, India, and China and now lives in New York City, so she knows what it feels like to be caught between multiple cultures. She chooses to embrace all her wondrous colors! This is her debut children’s book. Visit her online at http://jyotirajangopal.com/.

Supriya Kelkar grew up in the Midwest, where she learned Hindi as a child by watching three Hindi movies a week. Supriya is a screenwriter who has worked on the writing teams for several Hindi films and one Hollywood feature. She is the author of Bindu’s Bindis; American as Paneer Pie; and Strong as Fire, Fierce as Flame, among others. This is her debut illustrated book. She invites you to visit her online at http://supriyakelkar.com.

Is It Time Yet? Teaching Kids Time Management with a Lakeshore Learning Giant Classroom Timer