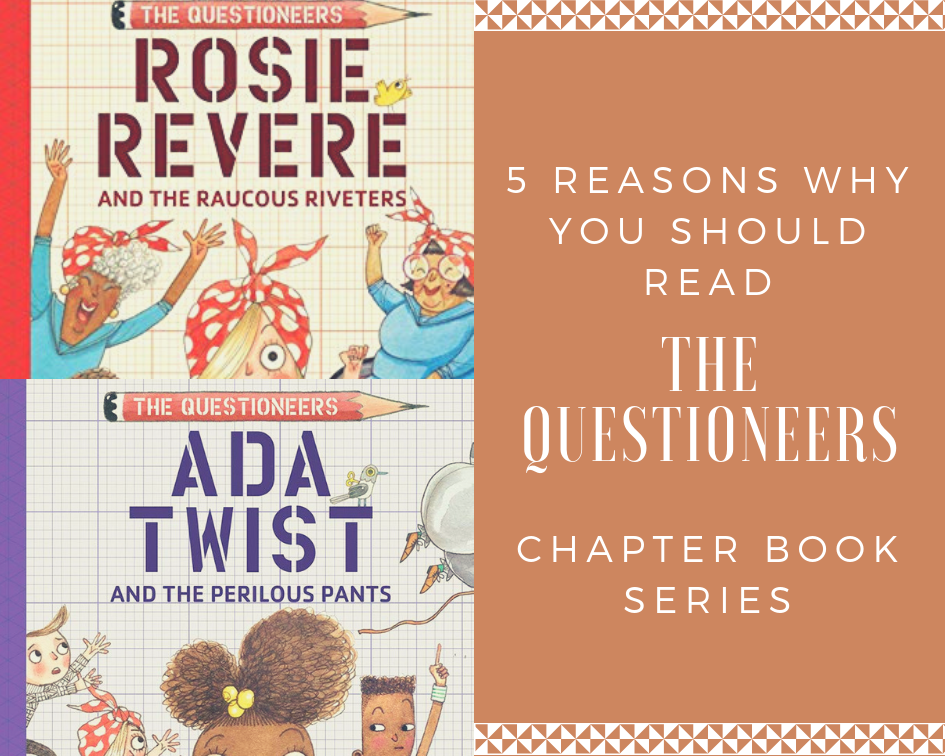 I could hardly contain my excitement when I initially learned about The Questioneers Chapter Book Series, a clever chapter book spin-off of the popular STEM picture books based on the characters Rosie Revere, Iggy Peck and Ada Twist.  I am a huge fan of Iggy Peck, Architect, Rosie Revere, Engineer and Ada Twist, Scientist so that automatically made me have high expectations for the chapter book series.  If you love Ada, Iggy and Rosie as much as I do, here are five reasons why you should read The Questioneers chapter book series:

1. Each of the original high achieving, STEM lovin’ bunch of kids are featured in the series: Ada, Iggy and Rosie.  Plus, there are a few new characters introduced (Mrs. Lu, the Blue River Riveters, Ada’s great-aunt Bernice) along with some familiar ones like Rosie’s great-great-aunt Rose.

2. There’s lots of fun, engineer-inspired artwork featured throughout that is easy for kids to understand.  I love the use of graph paper illustrations shown throughout.  I think they really capture the feeling of Rosie actually writing in her notebook and taking notes for her project.  The illustrations are drawn in black and white with some added pops of red (and of course, Rosie and Ada’s signature red and white polka dots).

3. Just like in the picture books, readers will learn great lessons of: teamwork, brainstorming, persistence, camaraderie, problem solving and STEM.  I always love it when readers can take away wonderful messages they can use in their own real-life experiences.

4.  Diverse female characters are shown as strong and positive role models.  The Blue Riveters who are portrayed in Book #1 are a group of smart, tough and hard working airplane builders who just happen to be females.  This shows children that women can do ALL types of jobs including build airplanes, tanks, and jeeps.  The scarf-wearing character Rosie the Riveter is a cultural icon representing the women who worked in factories and shipyards during World War II.  She recently passed away in January 2018 at the age of 96.  The hard work of the Riveters helped the Allies win World War II.  So there’s also a bit of history kids learn too about The Riveters in the back matter.  How clever of author Andrea Beaty to introduce a real-life historical element to the character in the book!  I’ve seen the Rosie the Riveter image for years and never made the connection of the red polka dot scarf to Rosie’s character until reading this book.

5. The chapters are short (there are 22 chapters in total) and contain lots of action words including a good amount of onomatopoeia that kids are sure to love: THUD, CRACK, BOOM, SPLAT, SLURP (these words are always so fun to say with kids).  An early reader could read this book easily on their own or with the help of a grown-up in a short period of time.  The chapters don’t drag out and they are fun to read!  Grown-ups will love reading these books just as much as the kids.  Makes a fantastic family read aloud book for story time at home!

Overall, the kids and I loved everything about Book #1 of The Questioneers series.  It’s perfect for science and STEM enthusiasts or budding entrepreneurs to read.  The back matter also contains factual science information about valves, a brief history of The Riveters, a “Think About This” question for kids to ponder, and author/illustrator notes.

We’re already looking forward to reading the second book in the series when it publishes in April 2019!

Your turn: Have I convinced you to check out the books in this series?  Have you read any of the popular picture books?  Which character from the series is your favorite?  Feel free to share in the comments.

Rosie Revere and the Raucous Riveters: The Questioneers Book #1

Recommended Ages 6-9 and up 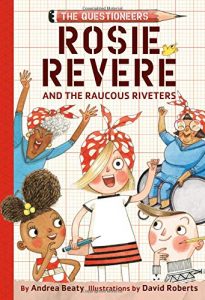 Ada Twist and the Perilous Pants: The Questioneers Book #2 (Available for pre-orders NOW!)

Publishes in April 2019, but you can pre-order it NOW!

Recommended Ages 6-9 and up 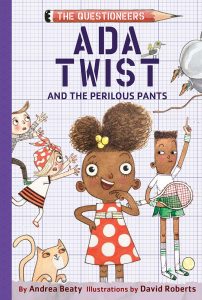 Your Guide to Literary Road Trips Across America

Christmas in September with Santa Bruce + A Giveaway!