About fours months ago, I started studying Latin.  Although Latin is considered to be a dead language that isn’t spoken anymore, I was intrigued to learn it for a few reasons which I’ll mention below.  Through my own personal studies, I came across an awesome DVD for the kids called Song School Latin.  The kids and I are now obsessed with watching this DVD over and over.  The songs are so fun and catchy and we’re learning Latin words at the same time.  Score!

Now, please understand I’m not advocating that young children need to learn Latin or any other foreign language.  I believe it’s important for kids to have a good grasp on phonics and their native language before learning a new one.  However, if multiple languages are spoken by parents or caregivers at home then kids will naturally pick them up on their own through frequent interactions.  Ok, enough of my little disclaimer…let me tell you what Song School Latin is and why I’m learning Latin. 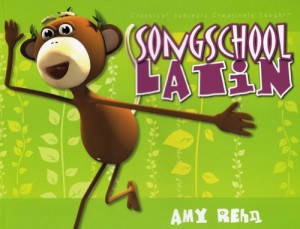 Song School Latin is a program that allows you to start Latin, in a fun and kid-friendly way.  The program is recommended for children ages 6 – 12 years old, but my kids are almost 2 and 3 years old and they love it!  Latin vocabulary is taught through kid friendly songs. This is not an immersion program, instead of the songs being fully in Latin, the Latin words are incorporated into English lyrics, which makes it easier for kids to internalize the meaning of the Latin words by listening to the songs.  The songs are fun and catchy which makes it easy to learn the Latin words and retain them.

Another fun resource I found for the kids are these FREE printable Latin Coloring Pages.

Why I’m Learning Latin
When I learned that 50% of all English words come from Latin and 90% of all polysyllabic words come from Latin I immediately became curious to learn it.  To me, it makes perfect sense to learn the logic and root of the English language and romance languages like Spanish.  Here are some other reasons why I wanted to learn Latin:

I hope you found this mini review of Song School Latin to be useful.  I’ve read it’s really popular in homeschool environments as well for those of you who homeschool your kids.

Your turn:  Did you enjoy this post?  Have you ever watched the Song School Latin DVD with your kids?  What other Latin resources have you come across for kids that have been useful?  Want to know what resources and books I’m using to study Latin?  Feel free to let me know in the comments.